When sensory messages transmitted through the ear are misinterpreted listening becomes disrupted or distorted. This distortion in listening is related to the functioning of the muscles in the middle ear. When these muscles are weakened their function is less effective. As a result, harmonious transfer of sound from the inner ear to the brain is affected and listening becomes disrupted. When the sensory message is distorted the brain puts protective measures in place that confuse listening, which can result in the development or exacerbation of certain problems.

If you change the way the ear works, you affect all the body’s major organs. These changes, in turn, can produce profound transformations in how we function.

Solisten® is a sound training therapy or listening programme that provides pre-programmed selected and processed music to stimulate and activate the auditory processing system. By stimulating the auditory system, Solisten® provides the “Tomatis Effect” and is able to reactivate the full listening potential of the individual. Solisten® is a home based programme that is portable and easy to use.

1. The voice only contains what the ear can hear.
2. If hearing is modified then the voice is immediately and unconsciously be modified.
3. It is possible to durably transform phonation when auditory stimulation is maintained over a certain time (the law of duration or remanence).

1. The function of hearing. It is possible to have good hearing but poor listening. Listening is an activity that involves receiving, deciphering and perceiving a message with the intent to respond. Poor listening can be the cause of many learning and communication problems.

2. The Energy function. The human ear assists with cortical stimulation. Music rich in high frequency harmonics energises the brain. Solisten® incorporates mostly Mozart violin concertos, which are rich in high frequencies. The programme also makes use of Gregorian chants, which have a soothing effect.


3. The Balance/Vestibular function. The vestibular system is found in the middle ear and informs the brain of movement as well as being vital in controlling balance, co-ordination and rhythm. Through its action on the vestibule, Solisten® has a beneficial effect on both gross and fine motor functions.

The ear and the brain are intricately connected and as the ear expands its functions so the brain expands its capabilities and states of awareness. The Solisten® programme restores the functioning of the muscles in the middle ear and corrects distortions in listening. Solisten®, therefore, through the Tomatis Effect, changes the way the ear works and as a result affects all the body’s major functions. These changes in turn have a profound effect in how we function.

Are you a therapist looking to rent a space?

Sensory Kidzone offers a variety of benefits for you 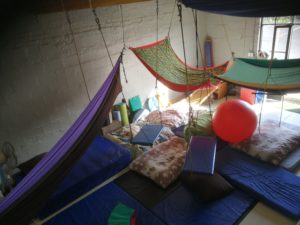